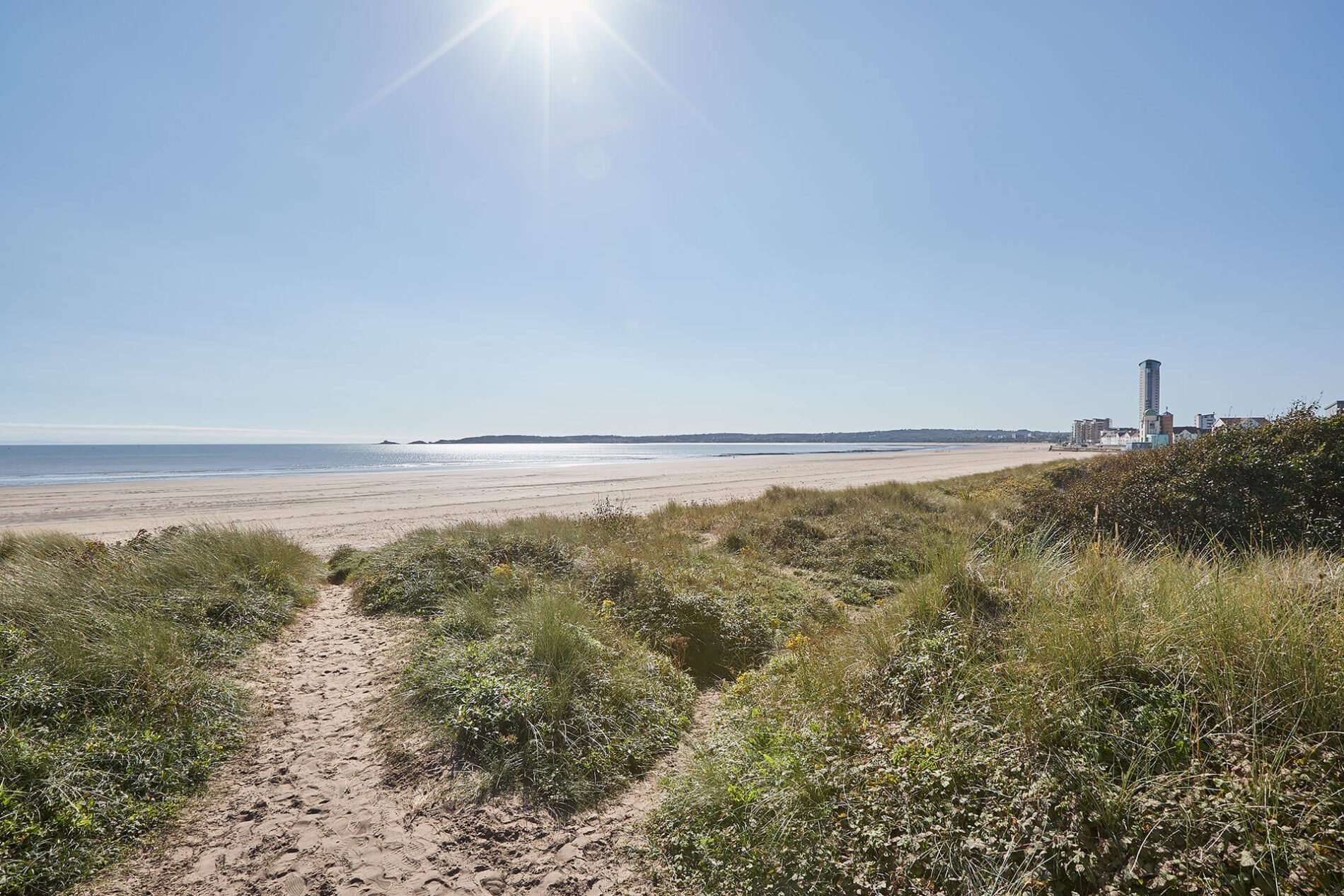 Swansea enjoys a magical setting on Swansea Bay. It boasts all the perks of city life: entertainment, culture, history and sporting life. Yet the Welsh city is also an ideal location for people who enjoy the great outdoors. It has several parks and gardens, a wide seafront and a new marina – perfect for a UK staycation.

Swansea is undergoing a major regeneration. But this is peppered among the historic architecture for which it’s more renowned. The city centre and the recently-developed Maritime Quarter are today both vibrant and buzzing areas of the city.

It also has a significant student population, thanks to the presence of Swansea University and University of Wales Trinity St David in the city.

Swansea has some famous connections. It is the birthplace of poet and author Dylan Thomas and Hollywood actress Catherine Zeta-Jones. The Welsh beauty’s film star husband Michael Douglas reportedly built her a £2m cliff top home in Mumbles.

Politicians Michael Howard and Michael Heseltine as well as actor, comedian, musician and singer-songwriter Keith Allen also have links to the city.

Swansea is a great place from which to explore the beautiful south Wales coastline, including the picturesque Gower Peninsula, the first Area of Outstanding Natural Beauty in the UK.

The majority of the attractions and activities in Swansea, such as museums, shopping and leisure centres, restaurants, bars, cafes, markets and other venues, are in the city centre and Maritime Quarter.

Swansea has a number of museums, which make a good day out. The National Waterfront Museum charts the industry of Wales, while the Swansea Museum reveals the industrial, maritime and cultural history of the city. The Dylan Thomas Centre is dedicated to the famous poet and author. There are also a number of tours and guides as well as an annual festival in honour of him.

The city has a vibrant arts culture and a good range of galleries. The Glynn Vivian Art Gallery is considered to be one of the top venues for art. Others include Mission Gallery, the Attic Gallery and the Nick Holly Studio. Meanwhile, for theatre buffs, there is the Swansea Grand Theatre, which offers a mix of events and shows.

There are shops, restaurants, bars and cafes galore in Swansea. The major shopping and leisure centres include Quadrant Shopping Centre, St David’s Shopping Centre and Morfa Shopping Park. There independently-owned shops in Uplands. Meanwhile, Wind Street is one of the most popular nightspots.

The LC Swansea, which claims to be Wales’ biggest indoor waterpark, is also ideal for the family. It is located near the National Waterfront Museum and boasts an array of slides.

There are many places to eat and drink in the city – and Swansea Market is particularly popular with foodies. The enormous glass and wrought iron building was rebuilt after the Second World War and now houses more than 100 stalls offering delicacies from across the region. Local produce includes cockles and laverbread.

There are a wealth of places to visit on the outskirts of Swansea and beyond. Amongst those is Mumbles, located on the west side of the Swansea Bay. It has some of the very best ice cream and seafood, and the Mumbles annual Oyster Festival attracts the foodies.

The stunning, unspoilt Gower Peninsula is an absolute must for the outdoor lovers. It boasts beaches, caves, cliffs and woodland. Three Cliffs Bay and Rhossili Bay are among the most breathtaking spots in Britain. There are also picture-perfect beaches at Caswell, Langland and Limeslade.